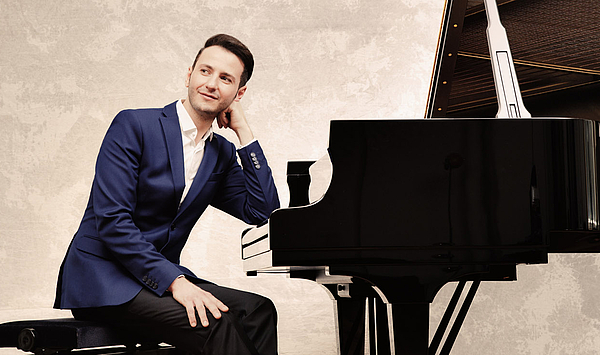 The Piano Department of the University of Music FRANZ LISZT Weimar is rejuvenating itself and is pleased to welcome highly competent reinforcements: as of April 2022, Michail Lifits will be teaching as a new professor of piano. The 39-year-old has so far been active pedagogically as a teacher at the Hanover University of Music, Drama and Media as well as in the context of national and international master classes. As winner of the Busoni Competition, he can look back on a worldwide concert career with recitals and as soloist with renowned orchestras. Since 2011, Lifits has been an exclusive artist with the "Decca" label.

"We are opening our rooms, instruments and hearts to someone rooted in art," says the director of the Department of Piano, Prof. Thomas Steinhöfel. "Michail Lifits is an artist and pedagogue who considers it a privilege to share his collegiality with students and teachers in humility. He is most welcome to us!"

"Creative exchange with young people and the imaginative exploration of significant literature for piano is an exciting process that never ends and helps both students and us teachers to develop," explains Michail Lifits. "Authentic, inspiring, expressive music-making, based on a solid pianistic technique, coupled with an artistic curiosity are the pillars on which I build my teaching," he adds. "An appreciative approach to teaching, individual encouragement and career-oriented work are important to me. And of course, as a teacher with an 'open ear', I am committed to the students."

As a soloist, Michail Lifits has appeared with many renowned orchestras such as the Deutsches Symphonie-Orchester Berlin, the Residenzorchester Den Haag, NDR Radiophilharmonie Hannover, the Haydn Orchestra Bozen, the Moscow Soloists, Orchestra of Valencia, Orchestra dell'Arena di Verona, Hong Kong Sinfonietta, the Munich Symphony Orchestra and the Munich Chamber Orchestra.

In addition to his extensive solo activities, Michail Lifits is both a passionate and sought-after chamber musician. He has performed with renowned artists such as Vilde Frang, Nicolas Altstaedt, Steven Isserlis, Cristina Gómez Godoy, Marie-Elisabeth Hecker, Andreas Ottensamer, Veronika Eberle, Gil Shaham and Nils Mönkemeyer. With his chamber music partner Vilde Frang, he recorded two CDs for "Warner Classics", which were awarded the "Echo Klassik" and a "Diapason d'or", among others.

Since 2011, Michail Lifits has been an exclusive artist with the "Decca" label. His debut CD with piano music by Wolfgang Amadeus Mozart, released in 2012, received without exception excellent reviews and was awarded "CD of the Month" by several leading classical music magazines and radio stations.

In early 2015, his second recording of Schubert piano sonatas was released, marking the beginning of his complete recording of Schubert's piano works. This recording elicited enthusiastic reactions from both specialist audiences and numerous journalists and has since been regarded as a reference recording within the younger generation of pianists. His latest recording is devoted to the piano works of Dimitri Shostakovich and includes, in addition to the 24 Preludes for Piano, the Piano Quintet op. 57.

Born in 1982 in Tashkent (Uzbekistan), Michail Lifits moved to Germany at the age of 16. He studied at the Hanover University of Music, Drama and Media in the classes of Karl-Heinz Kämmerling and Bernd Goetzke. He also received formative artistic influences in postgraduate studies with Boris Petrushansky at the International Piano Academy Incontri col Maestro in Imola (Italy). Lifits is a dedicated pedagogue and has been teaching at the Hanover University of Music, Drama and Media since 2012, as well as in the context of various master classes for piano and piano chamber music in Germany and abroad. Michail Lifits has been a "Steinway Artist" since 2014.